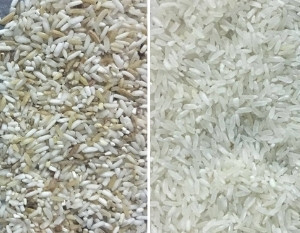 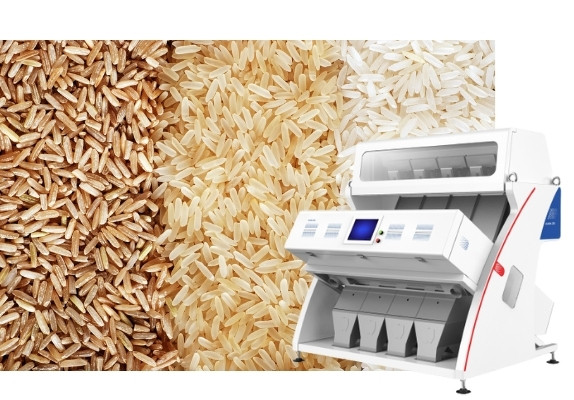 The CCD camera recongizes the foreign materials and impurities ,the high speed fast responding ejector blows away those impurities simultaneously.

The ideal rice sorting machine for your plant

Do you know that the quality of a rice color sorting machine differ so much ? 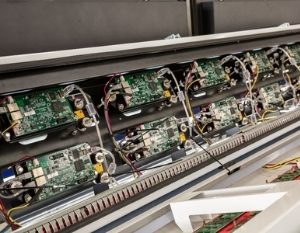 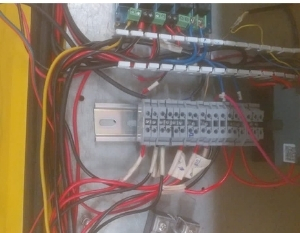 Other brands’ processing system are out-of-date and slow,  the sorting efficiency is badly affected 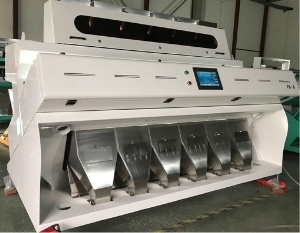 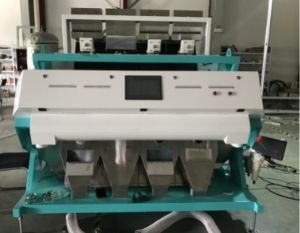 Other brand’s design is out-of-date and difficult for maintance . 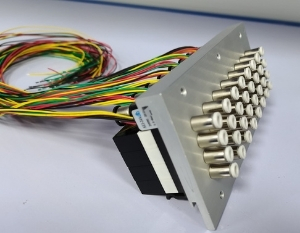 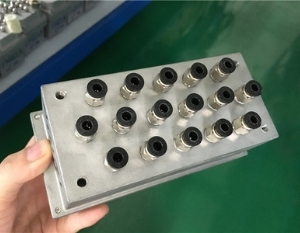 Other brand use 16 nozzles solenoid valves. It’s difficult for replacement and maintance. 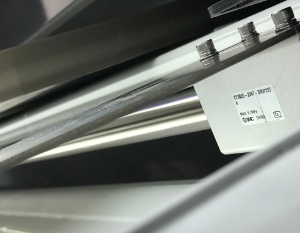 Skysorter uses world famous SMC cyclinder to ensure a smooth cleaning of the glasses, this to help for a better accuracy. 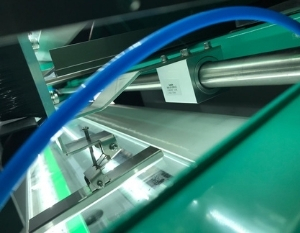 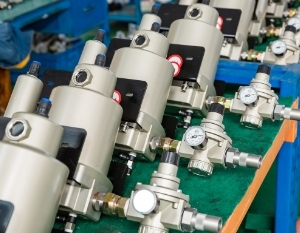 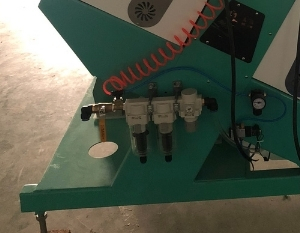 Other brand use second-class filters made in South Korea . The quality is not stable and filtering effect recessing with the time of use. 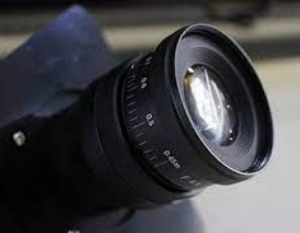 Skysorter’s RGB color sorter adopts a multi-billion pixel high-speed camera, which can  identify the material diameter as small as 0.04 mm 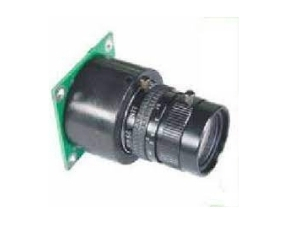 other brands’ color sorters is 20.48 million pixel . It can only reach a 0.08 mm material diameter , the identified color is fuzzy .

GET A QUOTE NOW

Are you Satisfied with the Current Rice Processing Results ?

How much are the problems costing you ? 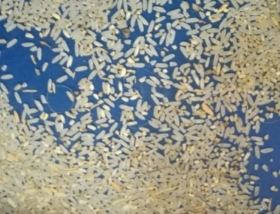 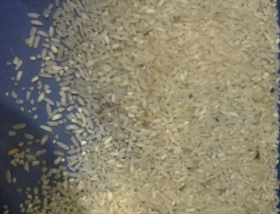 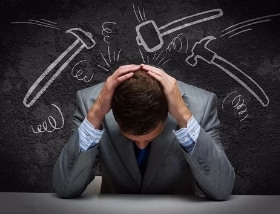 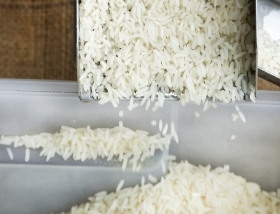 All You Need Just a Correct Rice Color Sorter

We care what you care most buying a rice color sorter machine.

Are you aware that the heavy labor costs, high wastage rate and low processing efficiency is invisibly killing your profits ? 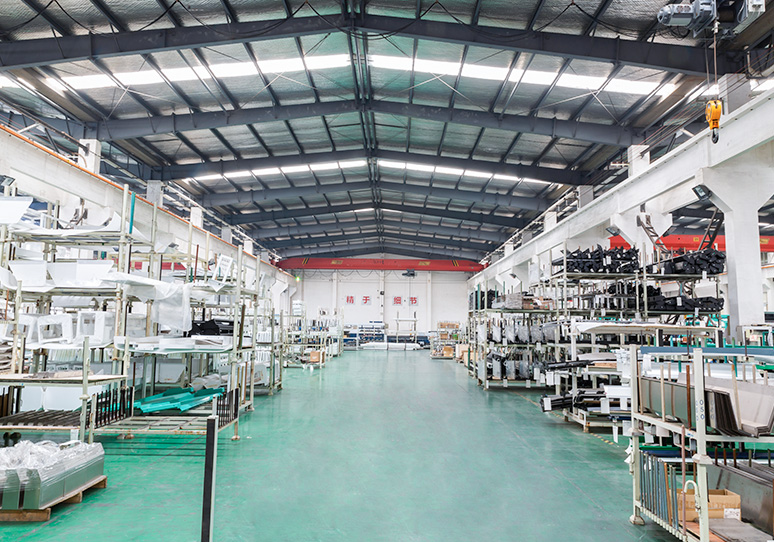 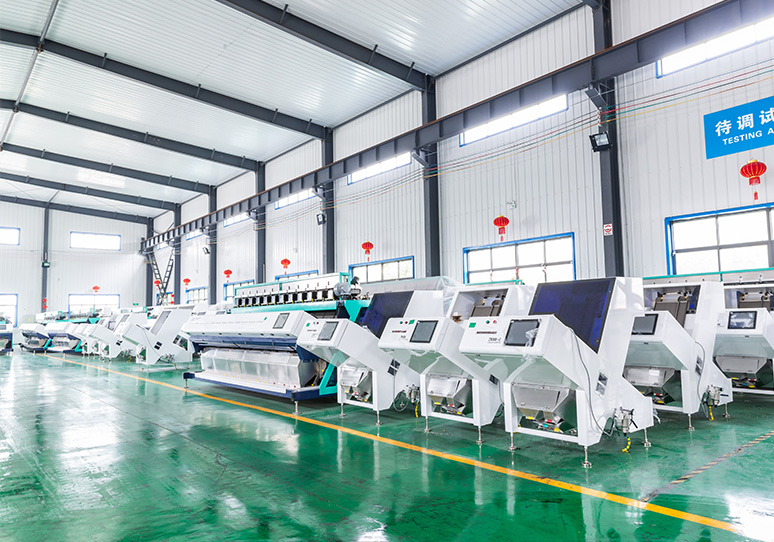 The rate of finished rice is the key index between you and your competitors. Each time your competitor upgrates their production line, they are leaving you behind.

If you are troubled by the poor productivity of your current rice mill line , Skysorter’s rice color sorter could be a great helper for you .

By investing in a rice color sorter machine , you will get more than 10 times production output with 99.99% sorting accuracy . This is one-time investment that bringes you long-term benefit .

Get A Quote Now 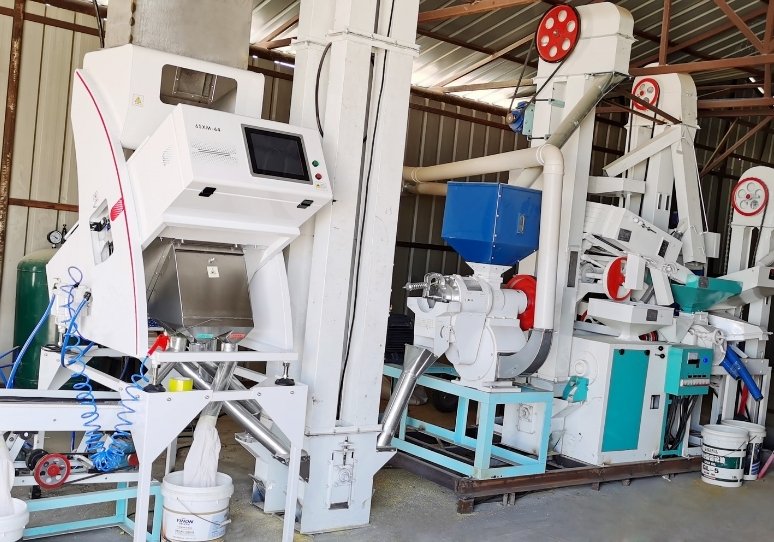 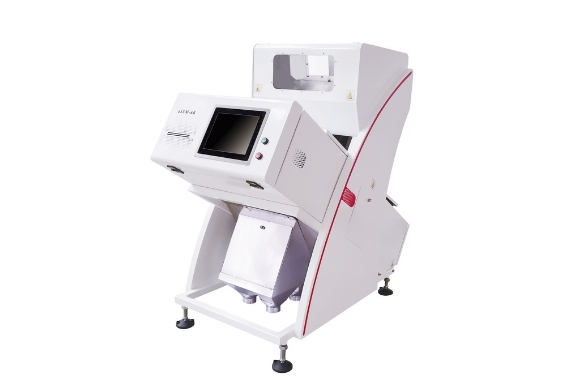 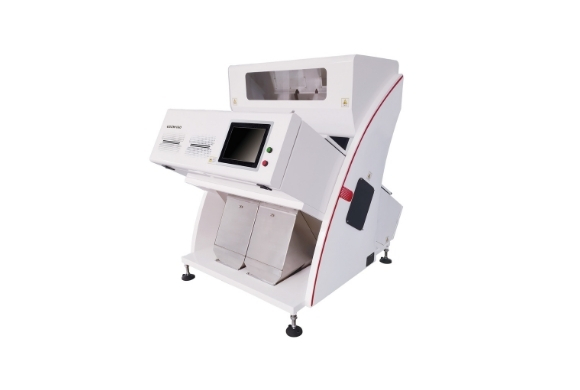 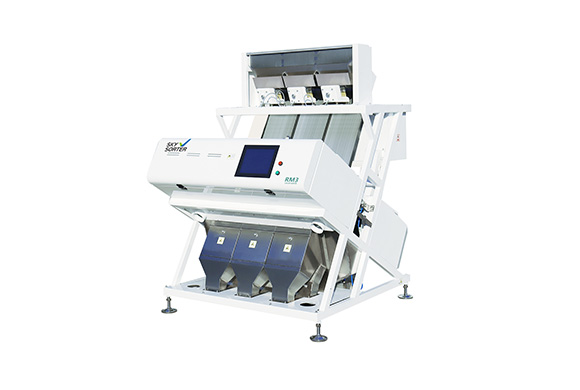 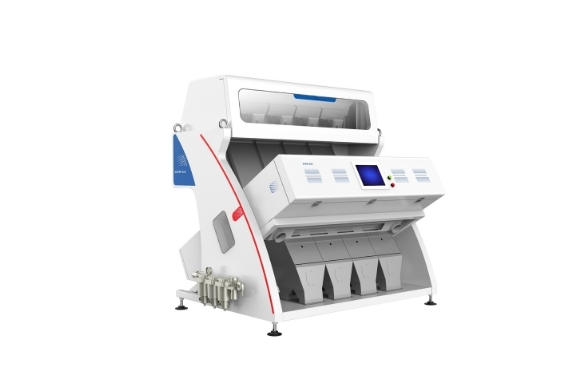 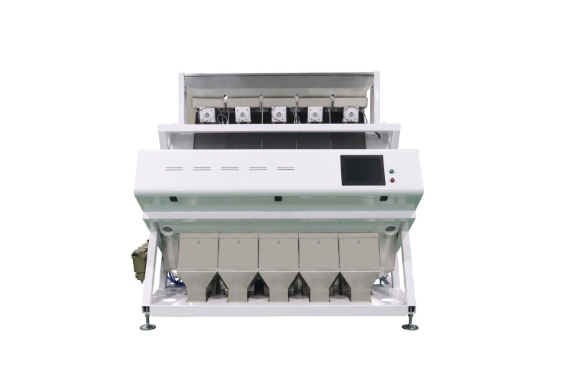 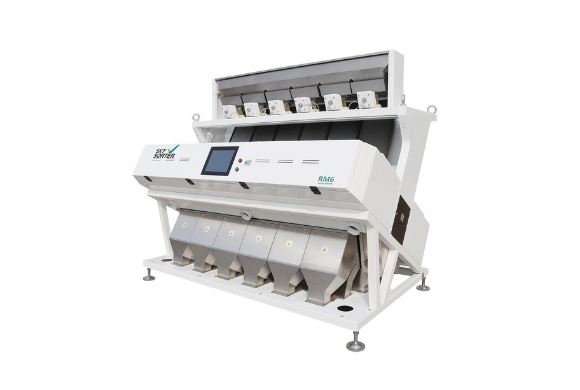 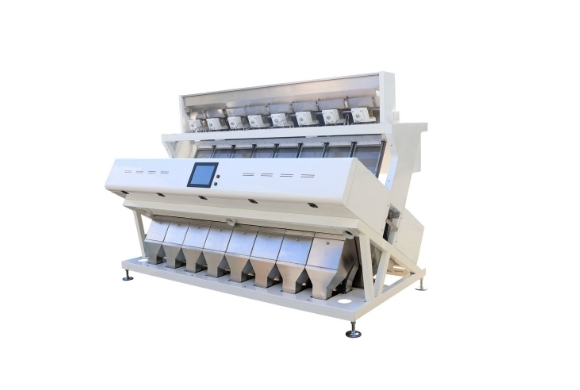 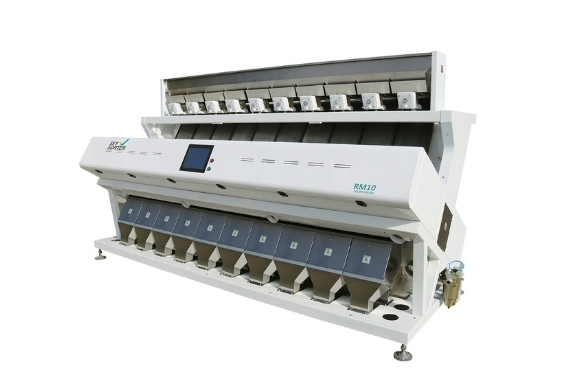 How to choose a rice color sorter ?-Ultimate guide 2021

Paddy rice is inevitably subject to mold and insect damage in the environment where it is harvested and stored, and is also accompanied by the entry of impurities. These off-color particles that are not thoroughly cleaned will not only affect the quality of the rice, but will also be hazardous to human health. In modern society, people are increasingly paying more attention about food safety and quality. The rice and beans we buy in supermarkets are well-processed products. All this can not be done without the participate of color sortermachine, and color sorter machine is also increasingly used in industrial production. If you want to buy a rice color sorter from China, here are few helpful tips for you:

What is a rice color sorter ?

Color sorter is a kind of machinery used for material identification and sorting. For example, the variety of grain, rice and beans are well-processed by the color sorter .After the rice are husked, grain bran and other relatively light impurities, can be sorted out by wind-blowing method, stone seeds and other impurities of apparently large or small size and rice, can be sorted through the screen.However, impurities of similar weight and size, such as rice of unwanted color, moldy latter diseased rice, and stone seeds of the same size, will have to be sorted by color sorting.  That’s why finally we can buy in the supermarket basically no impurities color also basically the same variety of rice.

It consists of feeding hopper, vibrating feeder and chute. The raw rice to be sorted enters the vibrating feeder from the feeding hopper, and through the vibration and guiding mechanism, the material is automatically arranged into a continuous row of status quo fine bundles, which are accelerated through the chute and fall to the detection area of optical sorting at a constant speed to ensure that the material is clearly presented in the optical sorting and spraying area. The feeding system provides the color sorter with the raw grain to be sorted and also controls the color sorter output. By adjusting the inlet hopper flow control board and vibrating hopper vibration amount, the output of the color sorter can be controlled per unit time. China’s vast territory, some places due to air humidity will occur when the rice along the chute slide and chute stick or stick to each other phenomenon, affecting the accuracy of color sorting, so the chute slide to be able to enter the rice within its heating and drying function.

photoelectric system is the core part of the color sorter, mainly composed of light source, background plate, CCD lens and related auxiliary devices. The light source provides stable and uniform illumination for the measured material and the background plate. The experimental results show that the blue LED light source as the best lighting source, CCD lens will detect the area (detection area for the sealed matte dark box, in order to prevent stray light into the CCD lens, affecting the accuracy) within the measured material of the reflected light into electrical signals. The background plate provides the reference signal for the electric control system, whose reflective characteristics are basically equivalent to those of the qualified products, while the differences with the rejects are large.

The sorting system is composed of accessories such as discharge bin, jet valve, air compressor and air filter purifier. As the kinetic energy of the rice material is large after the high-speed nozzle spray, the space of the discharge bin should be large enough and there are shock absorption measures in the contact part of the material and the discharge bin. Prevent the rice from rebounding into the CCD lens detection area for the second time after hitting the discharge bin, causing the phenomenon of misfiring. Pneumatic nozzle has been experimentally proven that the size of the nozzle interval and the number of nozzles is one of the key factors affecting the accuracy of the color sorter.

cleaning system consists of cylinder, glass wiper and other components. As the rice in the color sorting process will produce dust and other impurities easily attached to the glass. Once too much dust and impurities are attached to the window glass, through the window glass to tea materials for sorting detection of the photoelectric system will be easy to produce chain chain problems such as false detection. Lightly, the color sorting accuracy, color sorting with out the ratio of the impact, or cause frequent work of the jet nozzle, reduce the life of the nozzle and control system set burned nozzle control system. Glass wiper is installed on the cylinder, by the general control system according to the preset time by controlling the cylinder valve switch to push the cylinder piston slide to achieve the effect of dust impurities on the glass cleaning at regular intervals.

The color sorter is a device that uses photoelectric detection technology to automatically sort out the different-colored particles in the granular materials according to the difference of the optical properties of the materials.   The working principle of the color sorter is that the raw materials enters the color sorter from the hopper at the top, and through the vibration of the vibrator device, the selected material slips along the channel, accelerates down into the observation area in the sorting chamber, and passes between the sensor and the background plate. Under the action of the light source, according to the intensity of light and color changes, so that the system produces output signals to drive the solenoid valve to work blowing out the different-color particles blowing to the waste cavity of the receiving hopper, and the good selected materials continue to fall to the finished product cavity of the receiving hopper, so as to select the other purpose.

The sorting accuracy is the ratio of the quality of the material after sorting and the quality of the sampled qualified product after the removal of foreign-colored particles, expressed as a percentage. The industry standard is: 2% impurity rate, the selection of net rate ≥ 99.9%.

The carry-out ratio is mainly the ratio of the different-colored particles in the reject and the qualified rice particles brought out in the reject. High ratio is better, but usually reduces the accuracy and yield, generally the greater the processing output, the greater the take-out ratio. The users can do adjustment on this indactor according to actual situation.

the color sorter works at an ambient temperature of more than 50 degrees, the extreme point of the winter minus 30 degrees, more than 70 degrees in summer. The lamp is installed in a closed lamp box, its own heat and the ambient temperature superimposed. (For example, Southeast Asia and Africa) there is a slight jitter, the need for the light source in the length of the direction, the brightness fluctuations between any two points does not exceed 2.5% of the average, 5000 hours of brightness decay does not exceed 6%, while the need for stable work for more than 3 years. At the same time, because there are several thousand LED beads on a machine, this thing is not very easy to break, but in this environment, as long as a bad one, it is possible to have an impact on the overall effect.

The color sorter is a high-precision industrial machinery that requires routine maintenance and care during use to extend its working life. In case of malfunction during use, the manufacturer needs to be contacted for repair. The main wearing parts of the color sorter are spray valve, circuit board, filter, etc. The majority of suppliers in the market today offer a one-year warranty, and the damaged parts can be replaced free of charge during the warranty period. There are a few suppliers that offer a 2 year warranty.

Previously, the color sorter’s after-sales engineers can go to the customer’s site for installation and commissioning, but now due to the epidemic. All suppliers are unable to go to the site debugging, for conventional color sorting materials, through remote video guidance can complete the basic settings of the machine. Thus, it is convenient for customers to use.

Send us an inquiry to get your personalized color sorting solution. 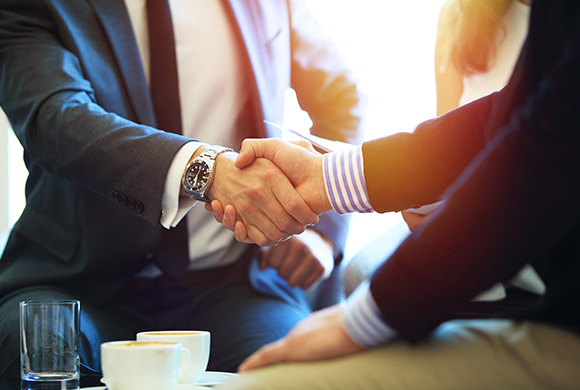